If you hit the jackpot and were gifted a stunning copper jam pan or copper mixing bowl over the holidays, then lucky you! Not only do they look great on display, but they have very special talents when it comes to cooking, especially when it involves sugar.

There are certain recipes that absolutely insist on using copper because it really does outperform any other materials out there. However, the magic of cooking with unlined copper does come with a few caveats. Understanding the benefits of copper and why it works so beautifully with sugar requires a visit to chemistry class. 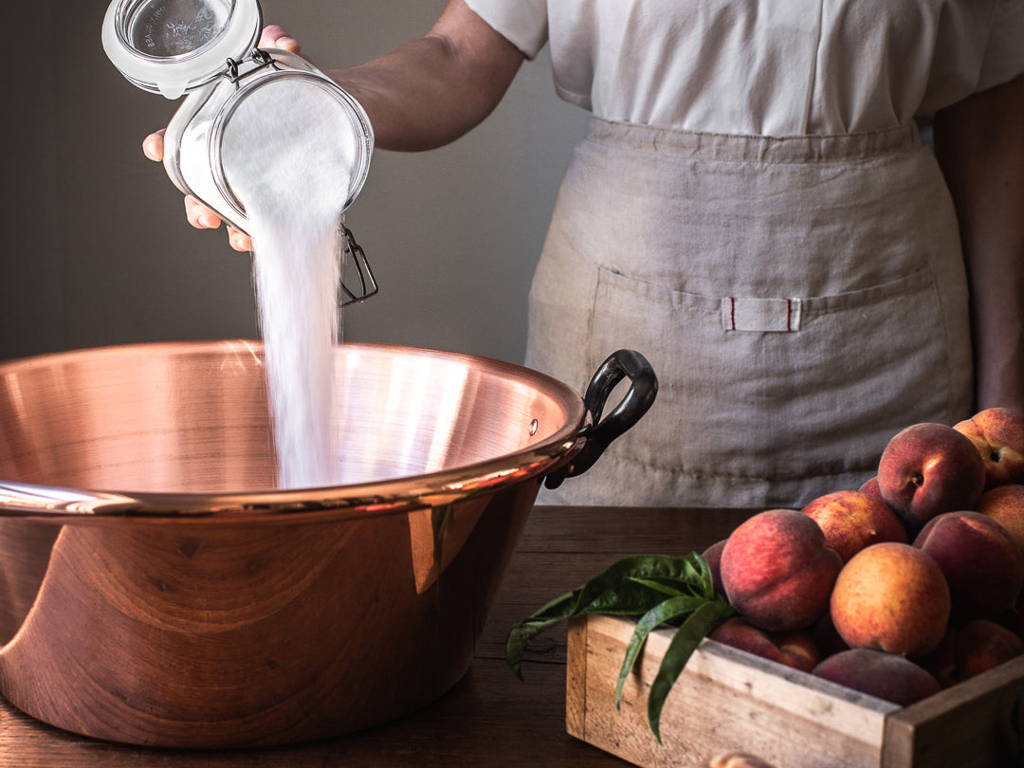 Copper and sugar: a love story

The story of copper and sugar is a fairly monogamous one. While lined copper can be used across the board in any recipe, unlined copper should be used for cooking when sugar is involved. For general cooking, you want to use copper that’s been lined with stainless steel or another non-reactive metal. When copper comes into contact with acid, it creates a chemical reaction that causes the metal to leach into the food being prepared.

The science of cooking with copper

Copper heats and cools very quickly and offers even heat distribution, making it a favorite tool for sauces and reductions made in the French style. But, since copper and acidic foods don’t mix well, it’s not exactly utilitarian cookware. So, why use unlined copper at all? Because when you invite sugar into the mix, it changes everything.

Think about a spoonful of blackberry jam with an almost impossible gloss and a deep, dark, reflective hue. Picture the smooth consistency of thick homemade caramel being spooned over a bowl of vanilla bean ice cream. Jams and sauces like these are delicate and need more than just any old saucepot to master. They require temperature precision, and fine-tuning is something in which copper is uniquely skilled.

In addition to being an excellent conductor, copper is thin. Where cast iron excels at holding on to heat for long periods of time, copper conducts and releases it almost immediately. This is why traditional confectioners' pans are made from unlined copper, allowing the heat response to increase and decrease at a second’s notice.

When working with sugar and heat, the goal is to break sucrose down into its elements, glucose and fructose. In order to boil sugar down properly, copper is useful because of its heat conductivity and stability. Spots in the pan that are too hot will crystalize the sugar, causing you to have to start all over again. 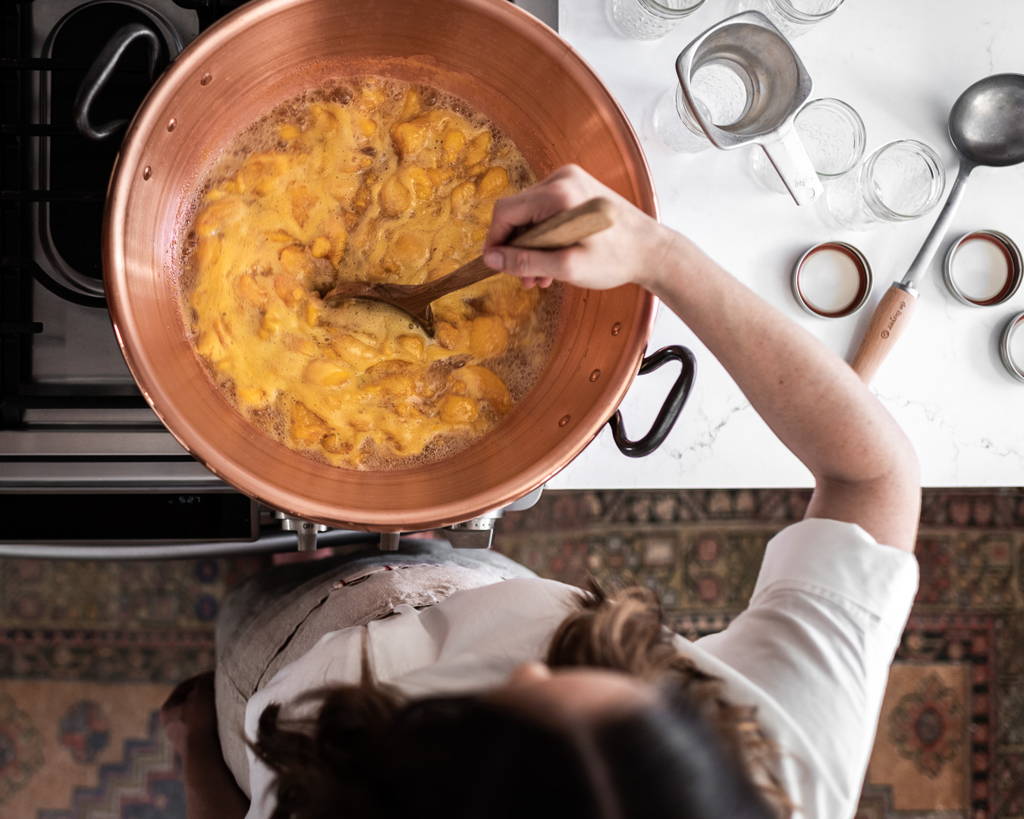 what foods are best to cook with copper?

Jams, candies, sweet sauces, and desserts are all in the wheelhouse of unlined copper. Expand those further into confections like sweet, crunchy pralines, salted caramels, stiff-peaked meringues, and rich, buttercream frostings. If you have a sweet tooth or you love holiday baking, then copper most definitely belongs in your kitchen.

Here’s a rundown of why jams and sauces are just better with copper:

When you make fruit jams and jellies, copper ions from your cookware bind to pectins in the cell walls of the fruit. Pectins are the gelling agents, and this positive to negative ion reaction helps firm up the jam by crosslinking pectin chains with ease. The sugars also prevent fruit acids from reacting with the metal, additionally ensuring that the brightness of the fruit and the boldness of the flavors are maintained over time.

The key to cooking with unlined copper is to make sure the food doesn’t sit too long in the pot. That’s why recipes specifying the use of a copper pan will recommend mixing all of your sugar and fruit together before it goes into the jam pot in order to prevent the copper from reacting with the acids in the fruit. This way, the jam isn't cooked long enough for copper to leach in.

If you’ve ever tried your hand at making homemade caramel, you know it can sometimes be tricky to toe the line between caramelizing sugar and burning it. This is where copper swoops in to save the day. To keep it from overcooking or breaking, simply removing a copper pan from the heat source instantly prevents burning.

When sugar is cooked down and begins the caramelization process, new compounds emerge. Flavors go from sweet to buttery, nutty, and malty. They expand further into fruity esters and bitter phenols, giving caramel its signature characteristics and complexity. This wide variation is only possible when the cookware being used can reach temperatures high enough to withstand the heat required.

The caramelization process begins when temperatures reach around 320°F. Sugar crystals start melting into molten sugar until it reaches around 340-350°F, when sugar begins to brown. This stage is perfect for thin strands of caramel used for decorating cakes and cookies. At 355-360°F, the caramel color deepens to more of a medium brown, getting darker and stickier. For candies and thick sauces, this is the point when you’d add cream, butter, and vanilla to round out the flavors. Beyond 410°F, it becomes black caramel, also known as baker’s caramel, giving it a malty flavor that’s also a popular coloring agent.

With so many possibilities in the form of cooked-down sugar, the ability to withstand high temperatures becomes important. With a proper unlined copper pot and a silicone spatula, you can manage any variation of caramelized sugar with ease and control.

For stiff-peaked meringue, nothing beats a copper mixing bowl. French cooks have known this for a long time, but it’s only fairly recently that someone actually took the time to figure out the science behind it. Author, kitchen chemist, and food historian Harold McGee explained this in-depth in his 1984 book On Food and Cooking. The Science and Lore of the Kitchen. His inspiration stemmed from a 1771 French book called Patissier, where he noticed an image of a boy whipping eggs in a copper bowl. After digging into this for himself, he figured out the reasoning behind it, as he explains in the scientific journal Nature:

”We found a link between how the functional behavior of egg whites changes when a protein in the egg whites, ovotransferrin, absorbs copper from the surface of the bowl.”

Essentially, he demonstrates that the copper ions from the bowl integrate into the egg whites as you mix, preventing sulfur atoms in the whites from bonding too tightly. This makes it harder to overmix, so you can more easily maintain the integrity and foamy texture of the peaks. Copper also decreases the chances of overheating the egg whites due to a metal-binding protein called conalbumin.

If you want extra fluffy whipped egg whites with a glossier sheen, then a copper bowl will help you achieve it. 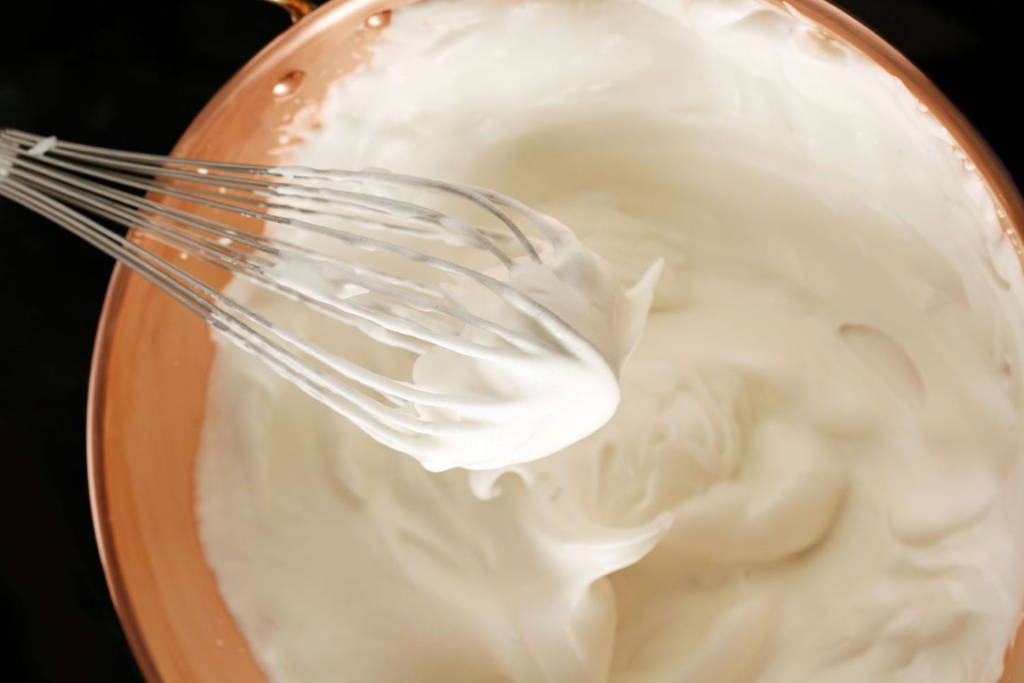 Is cooking with copper safe?

Copper is actually a micronutrient that we get from food, so it’s perfectly fine to use in the kitchen, but cooking or holding foods too long can be hazardous. The FDA suggests avoiding using copper for foods with a pH below 6.0.

The primary safety concerns of cooking with copper are more about the extreme temperatures it can withstand. Because boiled sugar is significantly hotter than boiling water, and due to its sticky nature, spills can be dangerous. A little extra caution is recommended to avoid burns on your skin.

Knowing how to use copper cookware properly will save you from too much exposure, while simultaneously helping you create some of the best sweet treats you’ve ever tasted!